One more VOSviewer visualization of the Future at AAA 2018 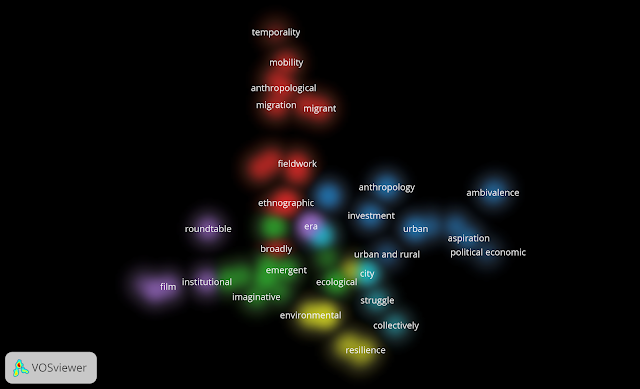 Posted by Samuel Gerald Collins at 6:02 AM No comments:

Mapping the Future at the American Anthropological Association Annual Meeting

"The future" (however imagined) continues to be a concern for anthropologists, and this year is no different than 2017.  But while I was content to just list the different panels in 2017, this year I decided to construct a semantic map of the session abstracts.  First, I created a text document with each of the 28 session abstracts that explicitly concerned the future as an object of research (rather than something like "the future of graduate education").  Then, I loaded up the file into Cowo, which spit out 55 words by frequency of occurrence (minus all of the stop words like "the").  Then I loaded the file onto VOSviewer, and created a semantic map of co-occurrences between terms (nodes) in the same sentences.

Here's the visualization from VOSviewer: 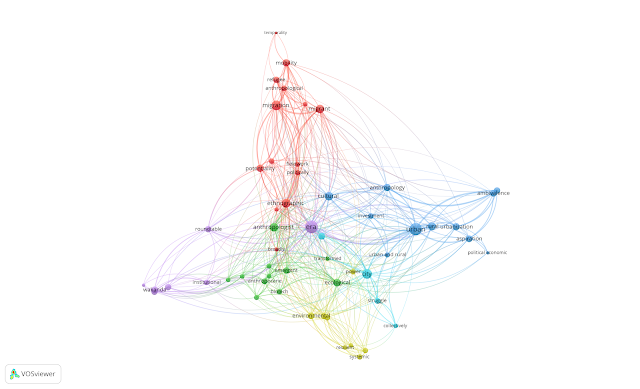 And here it is again in Gephi: 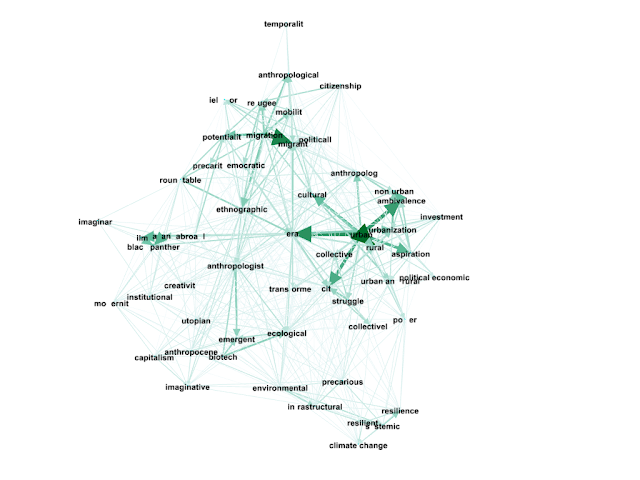 We can identify several semantic clusters here, but I want to highlight a few: 1). urban resistance to the neoliberal (right); 2) environmental disaster and the future of the anthropocene (bottom); 3). the utopian imagination for critical alternatives (left); and 4). human migration and human futures in an age of increasing precarity (top).

This semantic map is a a helpful shorthand for taking the pulse of the future in anthropology right now.  Hurtling toward disaster along multiple axes simultaneously (environmental, political, demographic), anthropologists (and their interlocutors) occupy multiples sites of emergence across precarious futures.

Are there themes that bring together these different future orientations?  Here are the top terms as defined by betweenness centrality:


This AAA promises to consider futures that impinge onto anthropological presents--that is, ecological and urban catastrophe that emerges into coeval fieldsites.  Yes - there's still a concern here for utopian promise (there's a panel on Ursula K. Le Guin!), but much of the panels in this map consider the disastrous coincidence of precarious futures with precarious presents.
Posted by Samuel Gerald Collins at 6:50 AM No comments:

Over the course of a year of fieldwork in Seoul (2014-2015), I accumulated tons of photographs (and some short films) that I made all over the city: a corpus of material that, for the moment, just resides on a couple of computers and cloud drives, waiting to be deployed into publications and presentations.  With storymap, I could use these materials to trace the arc of my research through the city.  Ultimately, I tried to take what oftentimes felt like random discovery and imposed a linearity to my thinking.  Or, perhaps, the exercise helped me to connect the projects into some semblance of order.  Telling a story, after all, involves the imposition of a frame, and the one I've sketched here is about a particular strand of urban anthropology in a complex city.

In the end, this looks to me like an interesting way to do a research prospectus for a job application or a tenure and promotion file.  It allows you to locate your research in space and narrate connections between otherwise disparate projects.  I could extend this to my research in Baltimore as well and create a storymap that could introduce work I've done over the last 20 years.
Posted by Samuel Gerald Collins at 6:14 AM No comments: