Book Review, The City and the City: China Mieville and the Revival of Anthropological Science Fiction 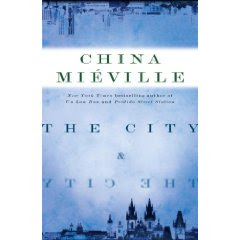 I have often suggested that China Mieville is the best new writer of anthropological science fiction, although appending the word "anthropological" to his stuff suggests the extent to which anthropology has changed in the time since the concept was coined in the 1960's. (Although, see a March 2009 interview Mieville did with Ursula K. Le Guin (posted on her website in the MP3s section)). Mieville's Bachelor's degree is in social anthropology (at Cambridge), and reading King Rat or Perdido Street Station makes me think of Marilyn Strathern's work, with a thick dose of Donna Haraway: lots of hybridity, fecund sites of emergence of new forms of life that combine biological and machinic into fantastic topologies, all shot through with a sense of postcolonial theory and a strong grounding in Marxism. Chad Oliver (my favorite anthropological science fiction ancestor) would, I think, not really have liked his stuff, and I'm not even sure that Mieville himself would particularly identify his work as anthropological. He certainly doesn't in a 2003 interview in Science Fiction Studies with Joan Gordon. There, he includes among his influences 1) his teenage fascination with RPGs; 2) his interest in postcolonial writers; and 3) his commitment to socialism. If anything, anthropology is presented as a negative dialectic leading him to reject postmodernity (then still fashionable in anthropology), and embrace a broader critique of capitalism.

But readers of The City & The City will find this his most anthropological to date--theoretically rich, critical, and ultimately subversive of contemporary militancy. The story (and I will not include spoilers here) concerns two cities (Beszel and Ul Qoma) that co-exist, one interpellated into the other at various, fractal places. Not surprisingly, a variety of institutional orders exist to police the sites where the two cities "cross-hatch," including educational programs to "unsee" the other city as well as a mysterious, vaguely para-human force (breach) to police unlawful incursions into one place from another.

That this is absolutely believable is testament to the 21st century explosion of "spaces of exception"--all of variously enfeoffed "zones" that proliferate along the edges of capital and empire, marking off places for foreign capital investment, for the suspension of one governing system for another (think Kaesong industrial complex at the border of North and South Korea), for the suspension of citizen rights or even (after Agamben) human rights: refugee camps, the chicanery of international "internship" visas, etc. When we hear, as we have now daily for years, about Bagdhad's "Green Zone," Guantanomo on the edge of Cuba, occupied territories, what we're really doing is witnessing the ability of law and politics to create hybrid spaces within nations--what Mieville calls in the context of his novel "interstitial" spaces.

Take a conventional topographic narrative--say Dickens' Tale of Two Cities--and then fold it on itself like a Mobius strip. That's the theory behind Mieville's novel (although his narrative takes a more familiar, linear form). But, in a real sense, it's also exactly the situation for much of the world's population today, all of whom, and with varying degrees of choice, shift between legal, political, social and cultural orders in a world where borders are mobile, but still very real. So: in the grand tradition of sf dating back to at least More's Utopia, Mieville describes the present through his oeuvre. And really, only through sf is this kind of description of hyper-reality possible (Mieville, I think, would not appreciate the Baudrillard reference).

The underlying message in this is the question of the ends of interpretation, the goal of analysis. Should we frolic in the interstices of global capitalism (a la postmodern jouissance) or should we solve its crime. It's no whim that leads Mieville into this uneasy amalgam of sf, fantasy and detective fiction. The city, as Poe and Benjamin knew, demands a detective--the desire to follow the thread of the crime back to its source. In the figure of Inspector Tyador Borlu lies the moral imperative to expose the workings of power beneath the phantasmagoria of interpenetrating boundaries and identities.

It is a clarion call for us to investigate the interstices of our own cities--to "breach" the ideologies that naturalize the logic of exception, and follow the crimes back to the powerful forces behind them.
Posted by Samuel Gerald Collins at 4:15 AM No comments: