The American Anthropological Annual Meeting has come and gone after a year hiatus. But, courtesy of the continued pandemic, it was not business as usual, and a combination of uneven face-to-face/online hybridity and a buggy app meant continued confusion throughout the conference. Adding to that confusion was the multiplication of conference hashtags, a continuing source of ambiguity that I have chronicled on this blog over the years. This year, #AAA2021Baltimore was joined by numerous, other hashtags: #AAA2021, #AAABaltimore, #AmAnth2021. Here’s a sociograph of different hashtags: 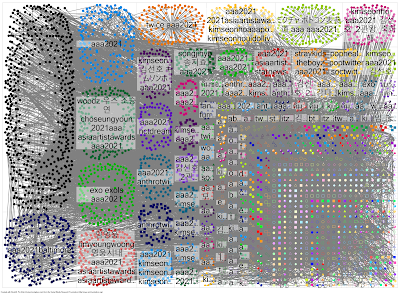 In the lower left of the graph, you can see #AAA2021Baltimore, the “official” hashtag, mostly deployed by @AmericanAnththro--accounting for the “hub and spoke” pattern of that cluster.. The largest clusters, though, belong to the AAA--that is, the Asian Artist Awards--and, in particular, the popular vote category, which generated at least 80 percent of Twitter traffic around AAA2021 (congratulations Kim Seon Ho!) in Korean, Japanese and Thai. Other hashtags referring to the Awards likewise commanded large numbers of likes and retweets, and anthropology was fairly occluded under the white-hot glare of K-Pop fans.

Note that @americananthro was the only anthropology account in the top counts.

Here’s the top anthropology tweet by re-tweet counts: “Interested in reaching a wider public with your research? Join us and @SAPIENS_org on Friday in Baltimore at the @AmericanAnthro annual meeting for our public scholarship event! Looking forward to learning and sharing ideas with you! @NapaAnthro @WennerGrenOrg #aaa2021 https://t.co/b4k210aCYs” While here’s the top tweet by “likes”: “Speaking of sanctuary spaces she has found/created within anthro, Dr. Harrison says (and I paraphrase) "If I had to depend on a department of anthropology for my sense of self, I wouldn't be an anthropologist today!" SAY. THAT. AGAIN. #AAA2021Baltimore”

In terms of the resulting network of meaning, this resulted in a AAA with a distinctly KPOP feel to it. Here’s a semantic network that classifies tweets according to otheir overall theme: 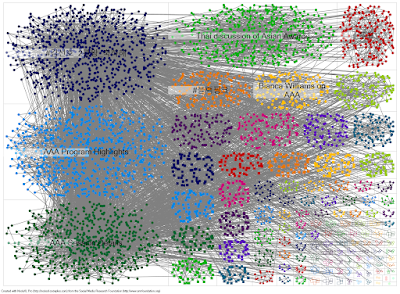 “Obfuscation” is a term that Finn Brunton and Helen Nissenbaum have used to describe the political mobilization of hashtags and other techniques to dilute messages, hide data or otherwise re-direct people for political ends. “Obfuscation is the deliberate addition of ambiguous, confusing, or misleading information to interfere with surveillance and data collection” (2015: 1). Brunton and Nissenbaum document the first instance of obfuscation in Russian attempts to quell protests over the 2011 parliamentary elections. By flooding the hashtag “#Triumfalnaya” (a Moscow public square where protests took place) with messages extolling Russian nationalism or just nonsense words, the Russian government rendered the hashtag useless as a rallying point and reference to protests resisting the Putin/Medvedev government. More recently, KPOP fans around the world have used to same technique to flood white supremacist hashtags with concert clips and KPOP news. But, here, we have the American Anthropological Association in essence obscuring itself through its dogged insistence on the “#AAA” hashtag, with AAA already a casualty of twentieth century efforts to select names that would appear first in the alphabetical yellow pages listings (AAA Bailbonds, anyone?).

Why does the AAA continue with this hashtag? I think it ultimately comes down to brand identity--in other words, placing the organization over the imperatives of its members who might use hashtags to build solidarity among anthropologists. And it also has to do with a firm misunderstanding of the way Twitter works. Events are temporal. Even though Twitter breaks the strict chronology of its feed with older tweets (“In case you missed it”), conference tweets are not going to persist more than a few days. And what is the goal? To communicate with anthropologists, or to increase the visibility of the American Anthropological Association? If it’s about anthropologists, then what about hashtags like “#Anthropology2021”? There’s no reference here to AAA at all, and the hashtag could be used by any anthropology conference. Why not? Are we afraid that this will compete with other anthropology conferences in late November? At a time when hybrid formats seem likely to persist, why not use hashtags to build links around the world to other anthropologies?

Posted by Samuel Gerald Collins at 8:56 AM No comments:

For many of us in anthropology, the advent of “big data'' represents a threat.  Why, after all, spend months developing rapport and interviewing 100 people when you can run sentiment analyses on 40 million tweets in a matter of hours?  Still, I agree with Tricia Wang, who urges us to engage big data and complement that work with our own “thick data.”  In “thick data,” the depths of our insights into meaning and interpretation, “the native’s point of view,” could act as a corrective to billions of data points that may “speak for themselves,” as Chris Anderson claimed, but not, perhaps, for people.  Ironically, this move to “thick data'' was enabled by the gradual choking off of data access to social media APIs.  Facebook, Instagram, Twitter - one by one social media platforms began limiting third-party access to their data, under the cover of protecting users from infringements on their privacy.  Well, not all third-party access.  Corporations and select researchers still manage to maintain access to the “firehose” of user data in social media, while the rest of us have to make do with whatever limited sets of data we can access.  For some platforms, (e.g., Facebook), access has ceased altogether.  You can still gain access to much of this proprietary data through scraping, but that’s not an ethical research practice for anthropology.  So, I’ve worked towards my “thick data,” using the limited data I can download from platforms like Twitter to broaden the “deep” data I’ve been getting from more traditional, ethnographic methods.

This has proven useful for community-based ethnographic work, and I've applied it to studies of neighborhoods in Baltimore, in Seoul, and elsewhere, resulting in articles and a co-authored monograph (“Networked Anthropology”) explaining the advantages of this mixed-methods approach to community-based, participatory research strategies.  I’ve also worked on multiple grants with the National Park Service using the same approach.   There, the park itself is the focus of social media investigation, with the ultimate goal being the identification of community stakeholders and their connections to the park.

However: in early 2021, after the introduction of a new API interface, Twitter allowed academics to apply for an academic track with access to 10 million tweets per month.  While this is not full access, it certainly moves my possibilities more into the realm of big data.  And this raises all sorts of new problems and possibilities.  While my work has utilized some basic metrics (centrality measures, word frequencies, descriptive statistics), the scale of data I now have access to requires a different set of empirical tests and, perhaps, a different class of questions.  Ultimately, I wonder if it is possible to even ask similar kinds of questions of these data.  Can they tell me, for example, about the meaning of place?  About the ways people interpret their worlds?  The challenge for me is to bridge “thick” and “big” data.

But the big challenge (and opportunity) here is to anthropology.  While no stranger to quantitative methods, we still generally do not work with larger data sets.  These have been inimical to the “small societies” approach that characterized anthropology in the early twentieth century.  So what will anthropology become in this environment?

Posted by Samuel Gerald Collins at 1:26 PM No comments:

Abstract for a paper-in-progress: quarantine and sentiment analysis.

A Beautiful Day in the Neighborhood: sentiment analyses of new connections and communities in a COVID world.

Quarantine re-makes the city around us, re-defining “inside” and “outside,” “home” and “neighborhood.”  “Staying home” means complying with a socially and politically constructed bubble that delimits not only who or what can move from one side or another, but the protocols to be followed when that barrier is breached.  Moreover, transitioning from one to another is not just a matter of spatial movement, it also involves a shift in identity, from the one quarantined to the one not quarantined.  Finally, quarantine is a temporal state: fourteen days, or until the city lifts the quarantine measures.  Under these conditions, what does “home” mean?  What does “inside” mean?  And when one is quarantined, what do more collective identities like “community” and “neighborhood” mean?  Under these circumstances, “home” can have a negative valence—it can be isolating and alienating from the people around you.  On the other hand, “home” can be a source of new realizations of self, and new formed of connectedness and solidarity.  In this project, I utilize a large set of Twitter data gathering thoughts on quarantine from different countries at different times, from March to September.  Mostly urban, the tweets originate in cities undergoing quarantine from around the world: Seoul, Paris, New York, each instituting different quarantine protocols at different times.  Using sentiment analysis and textual analysis, I examine Twitter as 1) a source of positive and negative valuations of quarantine; and 2) as a record of activities and relationships forged under quarantine.  On the one hand, preliminary results would seem to validate dire predictions from Durkheim, Simmel and others with regards to alienation in the city.  And, indeed, many people use Twitter to bemoan their isolation and their truncated lives.  On the other, many Twitter users explore the possibility of new connections with self and with community amidst physical separation.  In this, quarantine’s temporality plays an importance role by allowing people to construct visions of community and togetherness as a future temporality.  This paper explores the possibilities for building urban community in a pandemic world through an exploration of the way “home” and “neighborhood” have been re-conceptualized.  Ultimately, what comes from this research are insights into being together while being apart, and “home” as a staging area for the construction of community.  The essay ends with hopeful speculations on a post-pandemic city that retains communal solidarity while maintaining distancing.