I am deeply disappointed that I can't travel to Shanghai to see the national theater that is the World Expo.

With both Koreas plotting futures in which China plays a pivotal role, both expo pavilions express the shape of future, Korean engagements.

South Korea with a nod to its accelerated program of "cultural content" projected into the future as a longing for Korean culture through variously streamed media (image from the official site).   Korean writing (한글) forms the building blocks of a multimedia spectacle--literally, a media ziggurat erected upon Korean culture and language.

The North Korean installation (looking a bit like a carpet discount outlet), expresses an affirmation (an also a desire) for a properly "juche" future where China and the world will look to North Korea for its steadfastness.  The juche tower still burns!  I don't know what's up with those umbrellas, though. 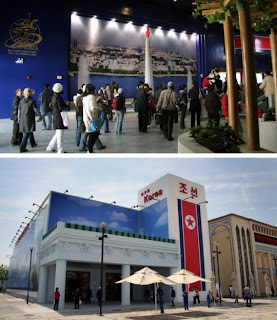 Posted by Samuel Gerald Collins at 12:23 PM No comments: