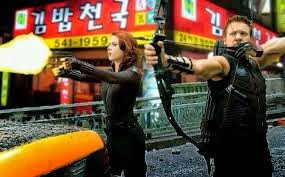 Children's day (어린이날) is upon us, so the family was off to the neighborhood CGV at 군자역 to see "Avengers: The Age of Ultron."  I'm not a fan, but I consoled myself with the thought that the movie would somehow work into my research on Seoul and science fiction.  And, indeed, it's certainly gratifying to see Avengers battling it out in front of "Kimbap Heaven."  However: without the still, I would have missed it.  For all of the money spent (and for all of the incentives the city of Seoul dished out), there's barely five minutes of Seoul in this film, and that--beside a couple of signs in Korean and an 옥상 텃밭--is of a generic "any city," bits and pieces of Seoul strung together into a non-place.

And I was not the only one disappointed.  As Gang Yu-jeong argued in 경향신문:

A masterpiece of atmospheric kitsch, the back alleys where the action takes place in the Avengers don't really look that different from the back alleys of Hong Kong or Beijing.  When the Avengers talk to Su-hyun (who plays Helen Cho in the film) about the situation, it's not different.  Nothing really sticks out.
The way Avengers 2 portrays Seoul isn't that far off from the way we see it.  Like when you run into your family on the street, the Avengers makes a familiar Korea seem strange.  [ . . .] But this is not the Seoul that we had hoped to see.  The Seoul represented in the film is not a place where I'd want to go.  In Avengers, that hoped-for place is nowhere to be found.   (강유정의 영화로 세상읽기]2015년 어벤져스 서울, translation mine)

Well, given the shallow treatment Seoul gets in the film, one would have to expect disappointment.  On the other hand, the Avengers (in its comic form), is not exactly a superhero version of Baudelaire's flaneur.  Sure--there's lots of urban background, but that's all it is: background. 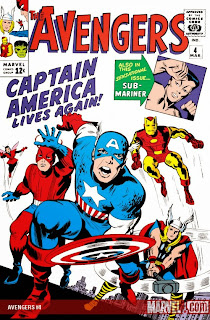 That is to say, it's just a scene to stage the action.  On another level, if we look at the film as the expression of a conquering and colonizing film apparatus, then Seoul can be incorporated into the action as well as any other place.  Here's where the film even engages in some self-referential dialogue with parallels to both U.S. foreign policy and U.S.-supported "free trade" policies.  As Tony Stark intones, "In a world this vulnerable, we need something more powerful than any of us."  There's equal measures of arrogance and lack of imagination in this line of thinking, and we don't need to move too far afield to see the corporation itself as this unifying power.  And what is cultural difference to a global corporation?  Ultimately, the cities of the world are only a proscenium to stage corporate power, and for that, Seoul will do just fine.