On Monday, I downloaded #AmAnth17 tweets.  This proved in many ways elusive and piecemeal.  First, the conference hashtags continue to shift.  Last year, the AAA finally discovered that the #AAA hashtag had other meanings and other audiences, among them AIDS activism in Japan and a pop music awards program in Korea (both of which prompted lively Twitter conversations this year).  Their efforts to promote alternative hashtags resulted in confusion, with people tweeting at #AmAnth17 (the ‘official’ hashtag), along with #AmAnth2017 (which would have been logically consistent with previous years) and, for the hell of it, #AAA2017. So the graph below includes tweets with any one of the three, with the top 50 Twitter users (by in-degree centrality) labeled. 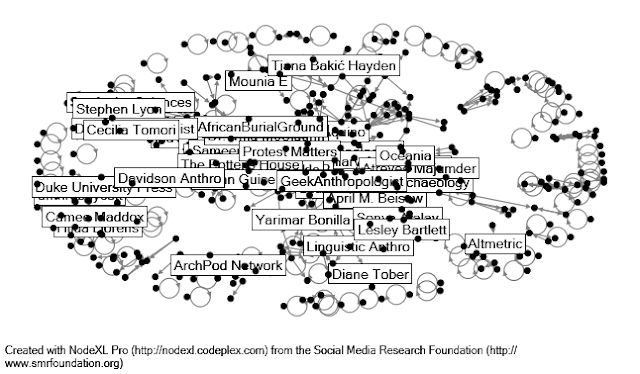 Here are the general metrics on this network.

It’s not an enormous graph, nor particular connected.  In many ways, it's similar to other graphs I’ve run in 2015 and 2016 (see.  For example, we see the same, prominent Twitter users.  Here are the top 50 accounts by in-degree centrality:

This is a great bunch of anthropologists and institutions, but, compared to previous years, Twitter traffic has diminished and, with it, topics have proliferated along lines of subdiscipline and sub-specialty.  That is, anthropologists (at least in their Twitter traffic) have retreated to the specifics of their panels and papers.  Here’s a word-cloud of the most frequently occurring 500 words from the 2017 AAA: 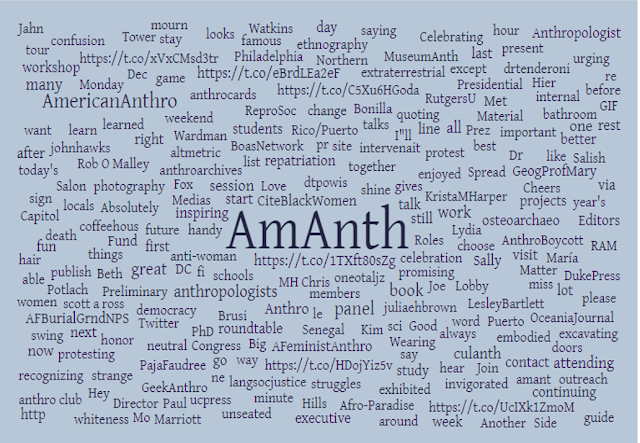 Now here’s another wordcloud from the 2015 meeting. 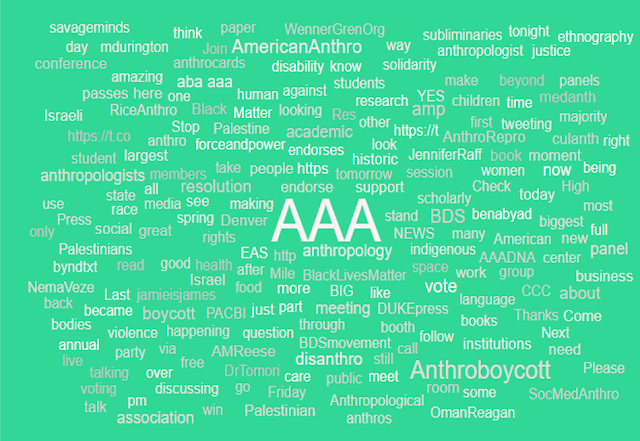 The prominence of activist causes in 2015 (#BlackLivesMatter, BDS) stimulated tweets across subdisciplines in a way that is conspicuously absent from this year’s conference with some notable (and welcome) exceptions (thanks, @yarimarbonilla, @aba_aaa and others!).

Of course, these causes are still with us, along with a dumpster fire of authoritarian politics, fascism, rampant misogyny, ascendant white supremacy and environmental apocalypse.  But, in all of this, where does anthropology matter?  And if we can’t represent our united opposition to, say, fascist policies in the U.S., then what hope do we have of demonstrating the relevance of anthropology to anyone outside of this conference?


the exclamatory nature of Anthropology Matters feels ineffectual. Are we trying to signal to the broader intellectual community and American public that anthropology does indeed matter? Or are we instead convincing ourselves that our choice of discipline was legitimate, necessary?

Well--those are the questions.  What will we--as anthropologists--do in the face of the palpable evil around us?

Posted by Samuel Gerald Collins at 11:59 AM No comments: