As I have done over the past few years (2017, 2016), I returned from AAA2018 and ran some Twitter analytics.  Here's the sociograph I came up with (click on the image to see it in its entirety): 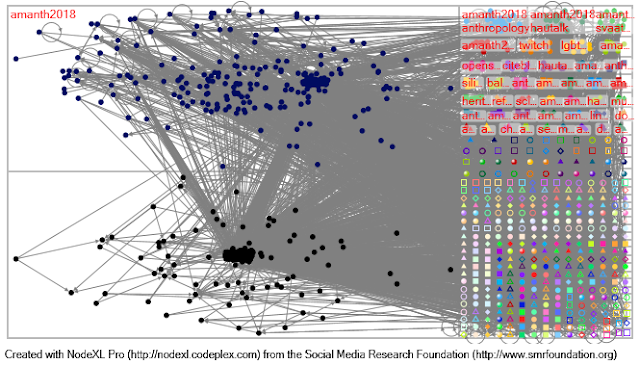 The chart represents over 2300 users and over 6400 "edges," which include both mentions and re-tweets.  I've arranged them in groups by their hashtags.  Not surprisingly, "AmAnth2018" is the largest group.  But if you look to the upper right of the graph, you can see other, prominent hashtags, among them "#hautalk" and "#lgbt."

If we rank the top Twitter users by "betweeness centrality" (a measure of the importance of a user in terms of their capacity to bridge parts of the graph), we can see many of the same usual suspects, but also some accounts that have become prominent over the last few weeks:

In particular, I want to highlight users like @thevelvetdays, @zoestodd, @lorenagibson, @anthro_sarah, @citeblackwomen, @savvyology, etc.  Why?  These are anthropologists who have been engaged in the debate over Hau (Journal of Ethnographic Theory) and the issues that the debate raised: racial inequality and gender inequality in the academy, institutional elitism, the appropriation of indigeneity, precarity and graduate students, sexual harassment, #metoo and gaslighting.

In actuality, this was a conference dominated by #hautalk and #refusehau.  For example, if we remove AmAnth2018, then a "worditout" wordcloud of the top 300 words in the hashtags looks like this: 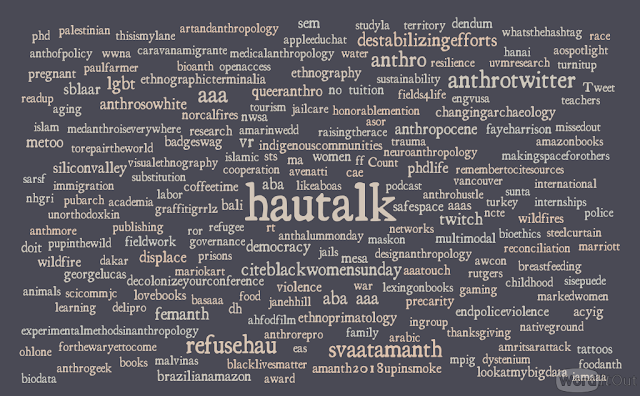 Since many people included two or more hashtags in their tweet (#AmAnth2018 and something else), the prominence of #hautalk to this conference is obscured until you remove the AmAnth2018--a nice metaphor for what indeed happened.

The AAA wrongly assumed that the Hau controversy was somehow ancillary to its own practice--a scandal in a non-AAA journal with a European editor.  But the issues there cast a very deep shadow on practices within the AAA, including all of those US scholars imbricated in Hau who are, after all, institutionally supported by universities considered (by some) to lie at the core of anthropology in the United States.

If I take the original sociograph and filter the tweets for "hautalk," a different picture emerges: 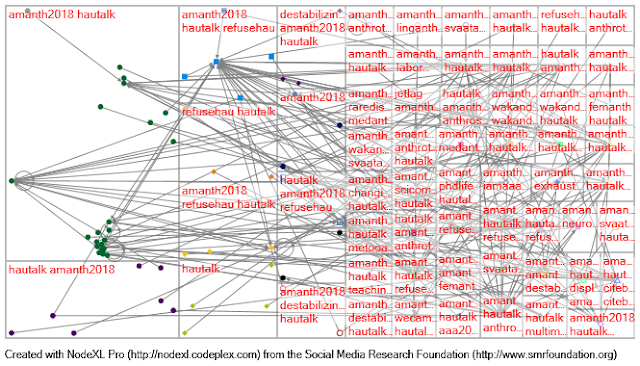 In other words, hautalk succeeded in overturning dominant meanings in a conference designed in many ways to marginalize those voices.  But will the AAA acknowledge that U.S. anthropology's "regular program" has been preempted?