Zombie in the Armchair: Anthropologists as Connective Agents 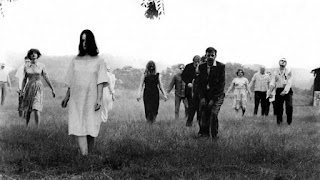 One of the community groups we work with has a book out.  Another has just won a major victory for environmental justice.  A third is looking for new staff.  Another has posted an incredible collection of photos from the Baltimore Uprising.  My responses?  Depending on the social media platform, “Like”; “Retweet”; “Share”; “Follow”.  Perhaps those aren’t even “responses”.  I haven’t done anything—I haven’t even moved from my chair!  Even J.G Frazer had to get up to pick up another tome of hermetic folklore.  But I would be remiss not to engage in this slacktivism.  Not only remiss, I would be endangering our relationship to our Baltimore interlocutors.  Public anthropology takes many forms—including advocate, gadfly and cultural critic.  What about zombie?

The digital, networked world in which we live has enabled unparalleled access to the tools of content creation.  All of us can make a movie, write a novel, publish photographs; after all, “Web 2.0” is supposed to blur the distinction between producer and consumer.  But for every would-be filmmaker who uploads their work on YouTube, there needs to be agents that propagate media through a network.  This is the moral dilemma of slacktivism: despite the particularly tepid support a “like” or a “share” represents, political action undertaken through digital networks require agents to “route” messages through their own networks, and to do so while limiting their own commentary or added content.  In other words, digital creators need armies of people to pass along messages to all of their friends.  Conversely, they don’t need other people to appropriate and remix their message—they just need us to do what we’re told.  To go back to my examples above, it would seem inappropriate and disingenuous to piggy-back on my informants’ successes with my own self-aggrandizing thoughts: “Nice photos.  See my recent article on de-industrialization in Baltimore for more context.”  Shouldn’t I just pass these social media along?  Without subjecting them to my own hermeneutic violence?  In other words, the Internet needs mindless zombies.

I’ve been reading Tony Sampson’s Virality: Contagion Theory in the Age of Networks and find much there for anthropologists to consider in terms of their own work.  Nineteenth century social theorists were keenly interested in this process of creation and contagion; in an era of social unrest and popular rebellion, it was a symptom of their fear of “the crowd.”  In Gabriel Tarde’s formulation, the crowd could be explained with reference to an “imitative ray” that “comprises of affecting (and affected) noncognitive associations, interferences and collisions that spread outward, contaminating feelings and moods before influencing thoughts, beliefs, and actions” (Sampson 2012: 19).  Tarde’s subjects “sleepwalk through everyday life” (ibid., 13), the unwitting host to a parasitical message that will leap from them to other sleep-walking subjects along a networked chain of imitation.  In their urge-to-imitate and reproduce, subjects leave their free will behind.  In Sampson’s terms, “Social man is a somnambulist” (13).

It is safe to say that this is not how most anthropologists would like to be described.  We are, after all, the ones who are supposed to be doing the interpreting.  Our informants may produce anthropologically intended media, they may interview each other, and they may post insightful commentary; but these are data that wait for us to collect, collate, analyze, interpret and publish.  Even if we do so for all of the right, public anthropology reasons, we very much mean to have the last word; this will-to-subjectivity is readily evident in the texts and media we create.  Critical of rational choice theory and Western, 19th century models of subjectivity, anthropologists rest on their authority to create, to measure, to rationate.  Moreover, the qualities of the zombie—passivity, submission, thoughtlessness—are also associated with the terrifying domination of the person under advanced capitalism.  We live in a world where increasing numbers of people have had their own wills ripped away away from them as they are forced into prisons, migrant camps, homelessness.  And at the same time, Tarde’s “imitative rays” have been harnessed by corporate capital in order to denude all of us of our capacity to judge for ourselves.

But there is another side to Tarde’s model, one where imitation is still premised on a mutual relationship.  Sampson continues:


Tarde’s notion of hypnotic obedience reveals a complex reciprocal relationship in which subjects are not simply controlled by deep-seated fears and phobias but also tend to copy (on the surface) those whom they love or at least empathize with. (170)

Obviously, this can (and certainly is) manipulated by corporations and governments, but the relationship need not only be one-sided.  Our own, social media lives suggest a more egalitarian relationship.  Our friends post something—we duly send it along.  We post something, and we expect that they will do the same.  We are all full of pithy, political insights, hilarious jokes, mad photo-shopping skills: we deserve to be copied, shared, re-posted.  In the age of social media, to be friends means to be ready to take the role of the zombie.

For anthropologists, this means that sometimes we may be the imitated, and sometimes the imitator.  After all, our informants may not always need our sagacity—but they will always need our support.  And that support will take many forms, some more active and agential than others.  But following our informants is an important role, indispensable to a networked world.  Sometimes, in other words . . . BRAINS . . . .

Posted by Samuel Gerald Collins at 7:49 AM No comments: