As Twitter continues to flounder as a business, many have tendered their advice for the struggling company.  On the other hand, people at Twitter have responded by introducing what appear (to some) to be "innovations" that are already shared by multiple, social media.  All this has prompted me to think about my own fascination with the platform.  Even though I've blogged here many times about Twitter's relationship to physical and social space, I find myself most often thinking about Twitter's time effects.

Like other social media, part of the allure of Twitter is the way it allows users to manipulate space--i.e., using social media to "be there" even when you're very far away.  But time is also a resource that people manipulate through their social media.  While some social media emphasize the present (or the "expanded present"),  other platforms allow for other, sometimes subtle, temporalities.  This powerful combination of space and time effects is nowhere more evident than the current popularity of dating apps for the 18-34 set.  As a recent Pew study suggests, by allowing people to connect to each other through non-contiguous space across asynchronous time, online dating apps utilize space and time effects to maximize opportunities for meetings.  In other words, the attraction of social media is more than just a condition of "speed"; it's the combination of sychrony and asynchrony that makes social media so compelling.

Ostensibly, Twitter (like other social media) displays content along a linear timeline, with the most recent tweets at the top of your reader.  You can think of this (as, perhaps, people less familiar with social media might) as similar to print-based content like newspapers and magazine articles.  But this isn't quite right.  On my desk, for example, is the excellent 2015 Baltimore Uprising: A Teen Epistolary, a "curated" collection of tweets from young people during the 2015 Baltimore Uprising.  As a book, it's taken all of the linear, temporal tweets and bound them up into a single, syntagmatic diorama.  As a temporal event, the book of the tweets collapses the Uprising into a single plane of discourse, and reading the book is a very different experience than live-tweeting the event.

However, this obvious difference discounts the structure of the social media platform as, ultimately, a heterogeneous chronotype.  Twitter looks like our experience of Newtonian time; to the casual observer, our experiential "now" is the "now" of Twitter.  Scrolling down the timeline takes us into a past that looks like our past.  But Twitter time operates according to very different rules than our ordinary, everyday understanding of temporality.

For one thing, there are many practices that can disrupt Twitter's apparent linearity.  First, you can re-tweet, summoning up content from earlier in the Twitter timeline and magically depositing it in the present.  Events that transpired in the past suddenly become the "now"--not as memory or echo, but as coeval with unfolding Twitter time.  The only indication of the asynchrony is the time-stamp. 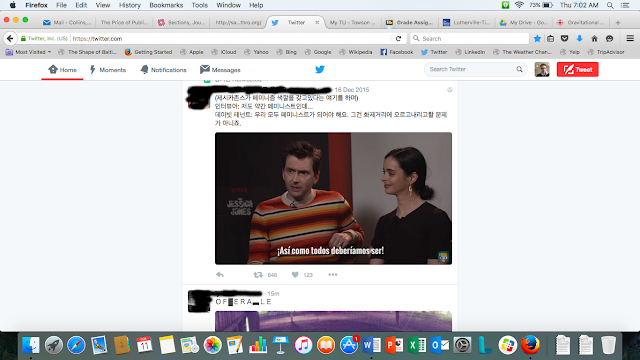 Threading your tweets is another common form of time manipulation.  While most users seem to use this "self-reply" function to articulate longer, more complex thoughts, there are also numerous time effects.  For example: 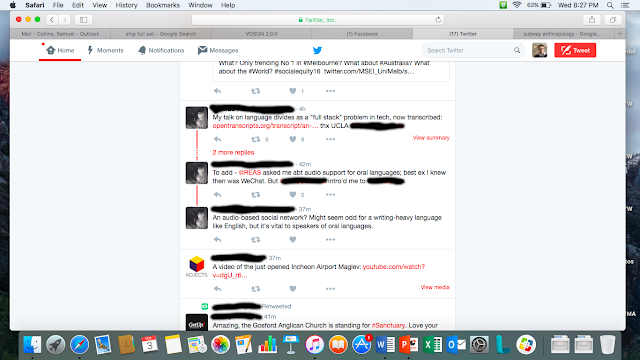 The differences between 4 and 37 minutes are collapsed through the 3 tweet thread.  Moreover, the linear flow of Twitter is reversed, since the oldest tweet appears first.  The above example is certainly less dramatic than a days or weeks-long gap between tweets in a single thread, but the power of this function (or what Fast Company calls a "hack") is to collapse temporally discontinuous discourse into a coeval frame.

You can also manipulate time-lines with hashtags.  By utilizing a hashtag, a user affiliates their content with other tweets that use the same, even if those tweets are temporally distance.  The effect of a search query, then, folds time into tweet content. 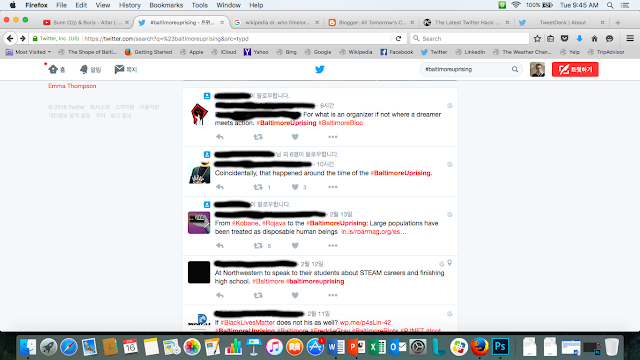 Or, rather, hashtagging sets up another timelines--this one relativistically yanking events out of their original timespace and setting up a chronological alternative.

In addition, Twitter (and third-party sites) offer a variety of tools to help users manipulate time.
There's "TweetDeck," which allows a combination of specialized timelines and scheduled tweets across multiple accounts--a kind of time dashboard where users can work within multiple threads across time zones.  And there are others as well--"tweet4.me"--that are more user-friendly apps that allow users to do the same.  While the intent of these tools is to enable users to always be "on," they really constitute a form of time travel, with the content I post now existing only in a shadowy future.  Discursively, the Twitter user can follow the same path as Robert Heinlein's protagonist in "All You Zombies" and go back in time to give birth to himself.

Finally, there are a variety of tools to freeze time altogether.  Your own archive of tweets is one example of this effect, as are third party apps like Storify, that let users create social media narratives with custom (and fungible) timelines that additionally allow you to mix multiple social media platforms, and then arrest the linearity of social media through "publishing" your story.  Here's part of one I did a few months ago on a small neighborhood in Seoul: 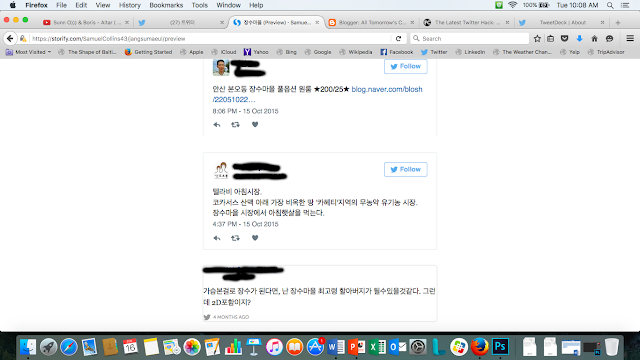 With all of this time traveling, and the all of the chronological disjunctures this implies, it's not surprising that recent features ("Moments" and "Home Timelines") are also temporal features, but I can't help but think that Twitter could do much, much more.  For example, time zones can be manipulated by a user through scheduled tweets, but not by your timeline--a difficulty not only for those of us interested in Twitter traffic in, say, Korea, but also for the general health of public discourse.  Another possibility would be to develop a more Bergsonian app for Twitter.  When you read someone's tweet, re-tweet or reply, you're reading it out of their, individual Twitter-time.  What were they writing or commenting upon before and after this tweet?  Yes--you could find out (just as you could simply run searches to read tweets from other time zones), but why couldn't Twitter make these into new features?

Twitter needs to consider it's relationship to time--to become a Time Lord, and to share their power with users taking control over their own temporalities.

Posted by Samuel Gerald Collins at 7:50 AM No comments: