The American Anthropological Association Annual Meeting is over, and, with it, the brief spurt of Twitter traffic that marks the event.  Here's a graph of Twitter traffic over the course of the week, created on NodeXL through a Twitter search for the hashtag #amanth2016: 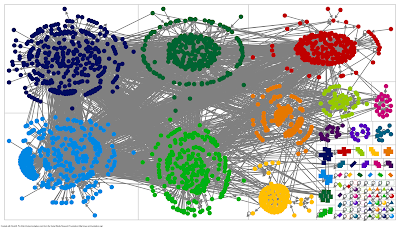 And some statistics on the graph:


Here are the 50 most popular twitter accounts by betweenness centrality:


And, a wordcloud showing the most prominent word pairs: 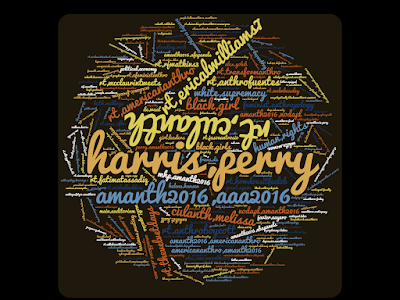 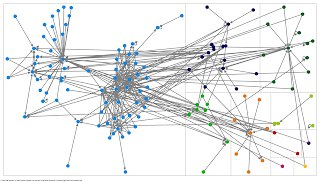 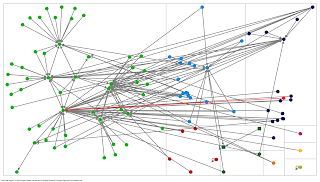 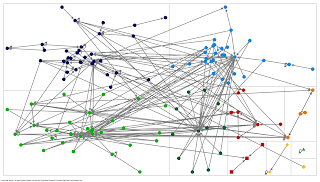 As in other years, anthropologists tweet their sub-specialties and interest groups, but are likely to re-tweet areas of broad interest that cut across anthropology.  Current concerns about growing fascism, white supremacy in the U.S. together with (related) violence against Native American protestors in cut across interest groups and energize discourse between anthropologists who might normally remain siloed in their own sub-groups. In the graph, these tweets provide connections between clusters.  As in previous years, I note that these moments allow anthropologists to "perform anthropology" at the Annual Meeting and, simultaneously, create moments of coherency across a large and fragmented group of academicians, practitioners and students.

And, yet, last year's AAA spawned twice as much activity as this year's--testament, perhaps, to a decline in attendance this year (although I have not seen an official count) and to continued confusion over hashtagging.
Posted by Samuel Gerald Collins at 6:09 AM No comments:

As I've done over the past 3 years, I ran Twitter searches for the American Anthropological Association Annual meeting this evening.  Unlike previous years, though, the #AAA2016 hashtag seems to be popular with a number of different groups, effectively obfuscating the anthropological voice behind other causes.  My colleague Matthew Durington (@mdurington) noticed that and tweeted yesterday: 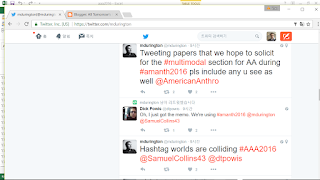 But, really, much of the damage had been done.  Here's a graph of my search results for #AAA2016: 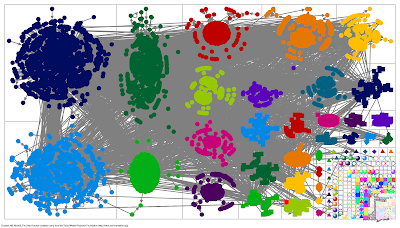 This dense graph (over 10000 edges) is made up of tweets from several events, but it's dominated by one, the "Asian Artists Awards" held in Seoul.  Here's the top tweet by betweenness centrality:

Indeed, all of the connected components are tweets from the Asian Artist Awards, with the twitterverse dominated by Thai fans.  The American Anthropological Association, on the other hand, is relegated to the violet component on the far, middle-right of the graph.

Changing my search to the new hashtag, "#amanth2016", we get a much smaller graph with a few hundred edges: 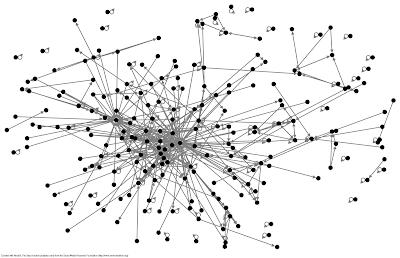 Here, the top tweets are from @AmericanAnthro, @JasonAntrosio, @culanth and @mdurington, and they revolve around the Melissa Harris Parry address on Wednesday night, the usual announcements of book vendors and paper presentations, and some self-referential discussion of the hashtag confusion itself.

So, what's the lesson?  There's a lesson for marketing in here, certainly, but also a broader and more obvious one for the American Anthropological Association: know what's happening in the world you purport to study.  After all, there was the same collision of hashtags last year (the Asian Achievement Awards and the Act Against AIDS concert in Japan), albeit not the complete eclipse the music awards has meant for anthropological twitter content.  More than anyone else, we should know that we join a crowded field of representation, and that the digital content we produce may flow into networked connections we never intended.  If we fail to attend to these other sources of digital content and meaning, then anthropological voices are effectively silenced.

Posted by Samuel Gerald Collins at 8:05 AM No comments:

Multimodality describes an anthropology across multiple media platforms--an anthropology that traverses film, photograph, theater, design, podcast, app and game (to name a few) as well as conventional modes of print representation.  But multimodality is a restless, protean concept, one that has already exploded its initial demarcation (modes of dissemination) into a spectrum of engagements.  Multimodality is about the platforms we use as we produce our work (social media, blogs, websites), and the social media that ripples out from it as people share, comment, re-mix and appropriate.  Finally, multimodality is the acknowledgement that people are engaged in anthropologies of their own lives, and that these productions (YouTube videos, Instagram photos) are worthwhile of attention as ethnographically intended media in their own rights.  By multimodality, then, we re-cognize anthropology along 2 complementary axes--a horizontal one that links together phases of ethnographic work that are oftentimes held distinct from each other, and a vertical one that links our anthropological work to the anthropologies of our collaborators.  Moreover, with the development of new media, new media platforms, and new forms of collaborative work, we would expect these axes to multiply.   Ultimately, multimodality takes the arbitrary divisions we make in our work and in our collaborations to task, and offers up new possibilities for old dilemmas.

In 2014-2015, I was doing research in Seoul on representations of the city through both mass media (novels, film, web comics) and through social media, particularly social media produced by neighborhood groups affiliated with various "village media" (마을 미디어) projects.  In particular, I was attracted to social media postings of alleyways and narrow roads, photos that looked like they were from the 1970s but were actually contemporary photos of the few remaining places in Seoul where you can see the old-style neighborhoods.  Decades of hell-bent urban development had developed (and re-developed) Seoul's neighborhoods beyond recognition, and narrow roads crowded with old-style homes (도시 한옥) were now a thing of the past--with the exception of specially designated tourist neighborhoods like Seoul's Bukcheon.

What was left was a sense of loss and nostalgia, and rather than the "poverty porn" of similar photographs in the U.S. (and in my own city of Baltimore), these social media postings vacillated between sentimental longing for a time before Korea's "Apartment Republic," when crowded streets and narrow, connected homes meant that people knew each other in multifaceted, intimate ways, on the one hand, and the commodification of that nostalgia for capital gain, on the other.  Extremely popular programs like "Reply 1988" (응답하라 1988) were on television, steeped in nostalgia for the previous times.   It is no mistake that this television drama ends with the complete destruction of the neighborhood under a redevelopment scheme--this was the experience of an entire generation of people (the 386 generation) who came of age in the 1980s. 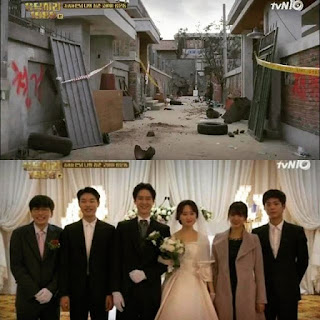 Similarly, Facebook and Twitter were filled with photographs and remembrances of vanishing neighborhoods, and I began to follow certain account and Facebook groups that were particularly rich sources of postings and re-postings of images of alleyways.  The first diagram shows tweets containing the keyword "alleyway" (골목길), ranging from "singleton" posts and photographs to others that were re-tweeted many times.  Photos from Ehwahdong (이화동), Bukcheongmaul (북정마을) and other neighborhoods were re-tweeted multiple times. 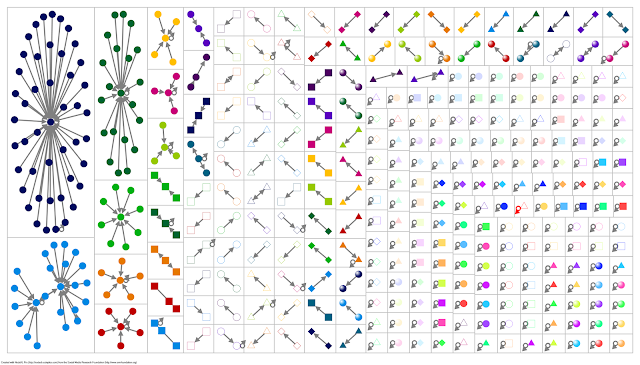 On the other hand, people posting these photos located themselves in various ways that suggested a very cursory--or even incidental----identification with these neighborhoods and with place in general. The diagram below labels people's tweets about Seoul alleyways by the locations they've set in their profiles. 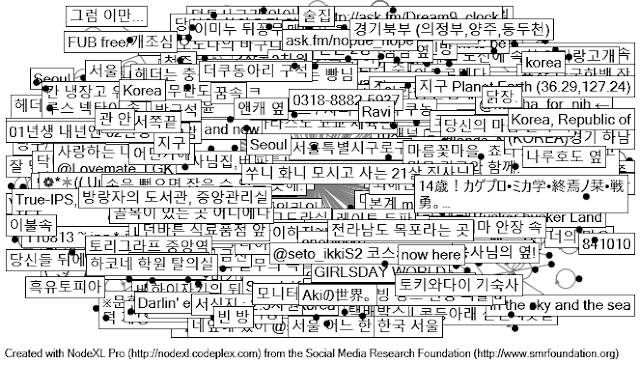 While some locations (e.g., "In an alleyway") suggest a slightly cheeky identification with these places, others ("the world," "In bed") suggest a more alienated, fragmented relationship to life and sociality in Seoul.

I started to collect and archive these diverse media on "Storify", an SNS platform that allows you to aggregate and comment upon other SNS content.  Storify enabled me to keep a notebook in a digital age when the ephemerally of content could easily mean that a post to Instagram today may be very difficult to find again tomorrow. 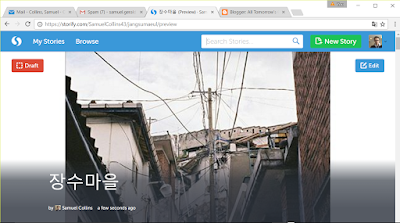 (a screenshot of a Storify collection of social media posts about Seoul's "Jangsu Village".)

Finally, I began to take pictures of Seoul alleyways, starting with one from my old neighborhood in Gileumdong, and then posting them on Twitter.  Concerned with issues of privacy, I was careful to avoid photos of people and personal effects.  I confined myself to public streets that, while reflective of Seoul’s older development, did not suggest poverty. 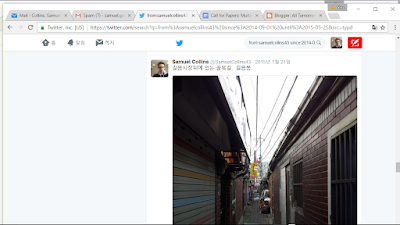 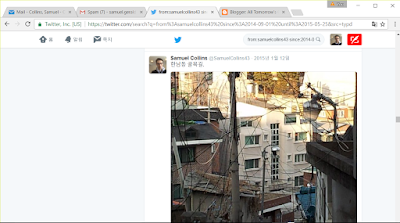 These images were re-tweeted and “liked” a few times, and were finally posted to a Facebook fan group collecting images of Korean alleyways.  The graph below shows users posting to the Facebook group, with their names replaced by the numbers of “likes” for each post.  The posts led to some online interviews about Seoul’s spaces and photography, but, by summer of 2015, much of this particular arc of photographic circulation had ceased. 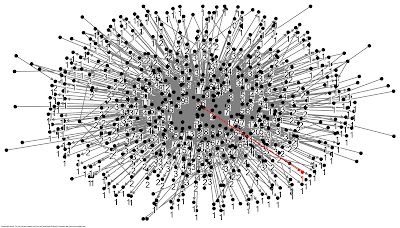 This is not visual anthropology. And nor is this “ethnographic” in any complete sense—it’s a fragment of ethnographic work refracted onto different media, different digital platforms.  A key component of this multimodality is its social dimension.  This isn’t just me posting some mediocre photos of empty streets; my engagement with these media brings along the engagements of hundreds of other users together with the circulations of their media.  We’re linked—networked—in a way that undermines the pretensions of ethnographic author-ship (and authority).   With multimodality, we may not always get to say what we mean--or, rather, "saying" and "meaning" are the aggregate decisions of multiple nodes.  Multimodality pulls our work into different productions, different circulations and, ultimately, different meanings.  We can utilize various analytics to trace these differentiated contexts, but we must endeavor to do so in order to not just examine the way the significance of our ethnographic changes according to each configuration, but to also trace the socialities each platforms engenders.

If you are also working along multimodal lines in your research, please consider submitting something to us in the "Multimodal Anthropologies" section of American Anthropologist.

We are accepting essays (print and photo), review essays and reviews that explore the contours of multimodality for possible publication in American Anthropologist.  To submit a   manuscript, or for more information, please contact us:

Posted by Samuel Gerald Collins at 11:52 AM No comments: